TYPES, SOURCES and USES of ENERGY

Let's start with the basics. The word “energy” originates from Greek “energeia”, which means activity or operation. In physics it is defined as the capacity to perform work. Energy is an abstract property that cannot be perceived-- it is not something that you can see or touch. It cannot be created or destroyed; but can only be converted from one form to another.
Although casually it is common to talk about generation, consumption or loss of energy, in reality it is neither generated, consumed or lost. It is transformed from one form into others, but its net amount in any closed system is conserved. Scientists believe that the total amount of energy in the universe also remains constant over time although there is no way to practically verify this.

Energy exists in various forms subject to a number of classifications, which sometimes overlap. In classical physics all these forms are often classified into two main categories: kinetic and potential. Kinetic energy by definition is associated with motion, such as motion of machines, wind, thermal motion of particles of matter, or solar electromagnetic radiation. Potential energy is associated with an object's position in a force field, a system arrangement (such as chemical or nuclear binding), or an object tension. For reference, there are four types of force fields: gravitational, electromagnetic, strong nuclear, and weak nuclear. For every system all these energies can additionally be classified as internal and external to the system.

In power industry, it is common to classify power sources into renewable and non-renewable. Non-renewable sources are referred to as finite or depletable. This needs clarification. Firstly, energy can't be renewed. It can only convert from one type to another. Secondly, strictly speaking, its total supply is essentially limitless. There is an enormous amount of internal energy stored in the atoms which make up all matter. According to the famous fundamental Einstein equation:
E = (Mass)x(Speed of light)2.
By using this equation you can calculate for example that theoretically one gram of mass can be converted into 25 million kilowatt-hours! The problem of course is we don't have a technology to convert any mass into a usable energy form. Nevertheless, technically speaking, there is no shortages of energy. The issue is not its availability, but the availability in convenient forms. So, when we are talking about energy sources, we actually mean only those raw (or primary) forms that can be practically transformed to certain more convenient forms with existing technology at a reasonable cost.

Unfortunately, most natural resources exist in the forms that are not convenient to use directly. We prefer those forms that are easily produced, distributed, and stored even though they may be not the most efficient ones. For example, the cars need to hold onboard energy to travel hundreds of miles. 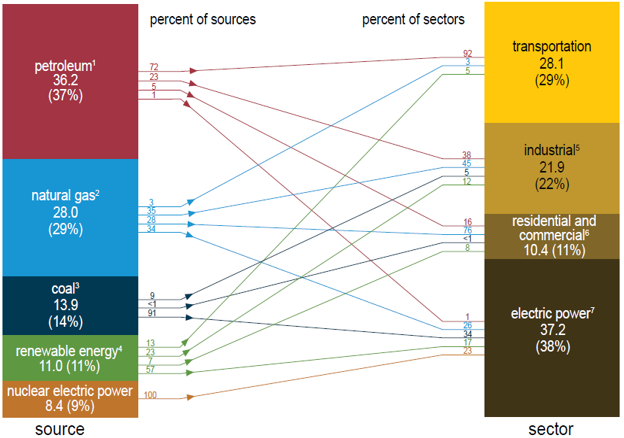 Energy production and consumption in the U.S. by sectors in quadrillion BTU (2017).
Source: U.S. Energy Information Administration.
That is easy to do with the chemical energy stored in gasoline or diesel fuels, which are produced from oil. They remain the lightest and most energy-dense fuels that can be carried for transportation although their usage has a lot of drawbacks. In general, the objective of the technology is to convert less convenient forms of energy into more convenient forms that we can practically utilize for our needs, with the minimum possible amount of undesirable by-products and emissions.

As we mentioned, there are two groups of commercially usable energy sources. Some of them, called renewable, are constantly replenished through natural processes. Other forms exist on earth in finite quantities and are referred to as nonrenewable or depletable. Renewable sources include: sunlight, wind, Earth heat, biomass, and moving water. So far they contribute to less than 10% of US energy use. At present, most of power we are still getting from nonrenewable sources, which include the fossil fuels — oil, natural gas, and coal, as well as nuclear fuel (uranium). We use all these resources to produce electricty, heat and transportation fuels.

All substances store some chemical energy due to the bonds between their atoms. When we burn the fuels, they generate heat due to the process of the rearrangement of the atoms and molecules. This heat can be used either directly for space heating, or converted to mechanical energy for electric generators, vehicles, or various industrial processes. Different fuels obviously produce different amount of heat. To compare their costs we need to know their energy density. The fuel BTU chart below compares average thermal energy content of some common primary and secondary fuels per unit volume and per unit weight. Numerically it indicates what typically would be released upon burning each fuel (or upon fission in case of nuclear material).